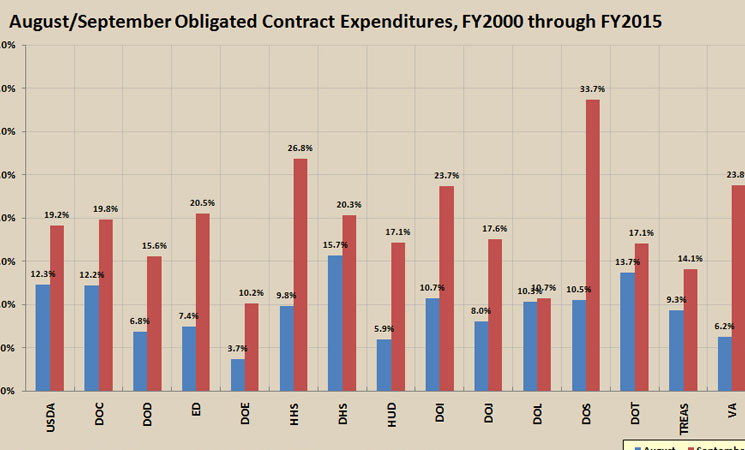 "Use it or lose it" serves as the mantra for Congress. By law, all money that Congress appropriates in a given fiscal year must be spent that year. Any unobligated funds on September 30 (last day of the federal government fiscal year) get reclaimed by the Treasury. This policy results in wasteful spending by government agencies, especially during last month of the fiscal year.

I've already discussed this issue and made reform part of my campaign platform. You can find details in the Procurement and Government Waste page of the site. The most important pieces are the details, and while the Procurement page offers a few pieces, I would like to shed a brighter light on things. Consider this updated chart for August and September prime contract awards for the 2000-2015 fiscal years- For a more complete picture as to how much agencies spend in the last month, consider this table showing the average spend by agency by month for the 2000-2015 fiscal years. Months with the greatest spend are highlighted-

It's extremely clear that most agencies experience an uptick in spending during the month of August and then a bigger uptick in September. The Department of State seems to spend an average of 33.7%, or a little more than 1/3 of their yearly budget, in the last month of the year. The Department of the Interior, the Department of Health and Human Services, and the Department of Veteran Affairs also spend nearly 25% of their yearly budget in the last month. I understand that big projects may emerge that require heavy spending- the data, itself, shows where that happens in middle-of-the-year months; what I do not believe is that agencies consistently finding major procurement needs 30 days before their budget is set to expire.

The problem goes beyond the major executive agencies as well. The Executive Office of the President spent 43% of their FY2015 budget in September, the Office of Personnel Management spent 25%, the Social Security Administration spent 34% (that's on contracts, not actual social security payments), the Federal Trade Commission spent 35%, and so on. We really need to curb the practice.

Thus, I offer to you now proposed legislation to do just that in the Budget Rollover Act. The entire bill can be read here. As an Independent running for Congress, being able to craft legislation plays a role in electability. I have no government experience outside of contracting work, thus this bill demonstrates my capacity to write law. The main points of the legislation are as follows-

Having rollover accounts allows agencies to better plan projects at the end of the fiscal year. Better planning results in better quality. As I mention in my thesis on Procurement and Government Waste, available IT metrics show big declines in quality with end-of-year contracts. Planning and not rushing to spend will create far less budget waste. It's estimated that 13% of budget outlays could be saved through limited rollovers like this. With about $1.1 trillion in discretionary spending for 2015, assuming not all of that is part of the budget outlays for various reasons, I guess about 5% of the total represents the 13% theoretical savings, or roughly $55 billion per year in savings due to better planning and non-wasteful outlays. It could easily be more.

Read the entire bill here or below. Current members of Congress wishing to support such an initiative are more than welcome to take this and introduce it to the current Congressional session 🙂

All data used in compiling the charts and spending percentages come from USASpending.gov. You can download prime contract awards by fiscal year. Be warned- there are millions of rows of data totaling gigabytes worth of content. Once all data was downloaded, I wrote a custom script in C# to read through each row of data for a given fiscal year and parse out the agency, month, and amount. All of that was then grouped and aggregated by code into spreadsheets for easy reading. Note that prime contract awards do not represent all government discretionary spending in a given fiscal year.

In the interest of transparency, I am offering up the parsed data in couple formats-

Percentages are highlighted in a given month to represent two things: the greatest spend of funds in the given fiscal year and for any month where 16% or more of the agency budget was spent.