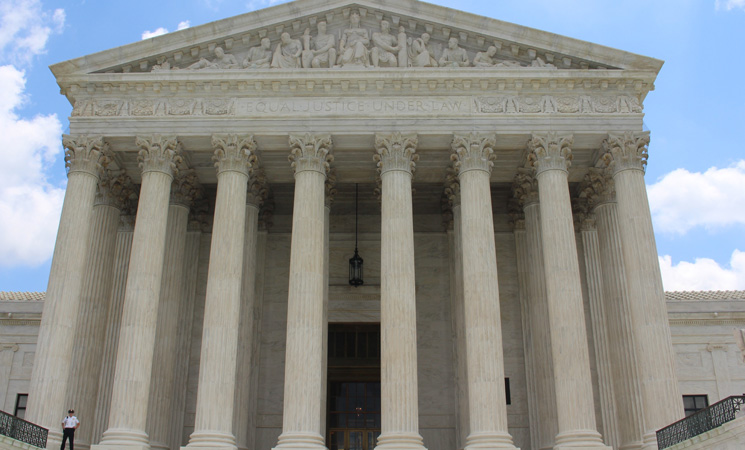 The first question Chris Wallace asked in the last presidential debate was about the Supreme Court and Constitutional originalism. The question was-

"First of all, where do you want to see [the Supreme Court] take the country? And secondly, what’s your view on how the constitution should be interpreted? Do the founders' words mean what they say or is it a living document to be applied flexibly, according to changing circumstances?"

Such a question is incredibly important to setting the tone for our Federal government, and yet, neither candidate really answered it. Both Hillary Clinton and Donald Trump focused on the first part of the question related to the direction they wanted to see SCOTUS take the country by way of a few key issues- namely abortions in Roe v. Wade, money in politics via Citizens United, and the gun legislation via the Second Amendment. Both candidates then skirted around the interpretation angle by saying things like "stand up for rights of people in the workplace" (Clinton) and "they will interpret the constitution the way the founders wanted it interpreted" (Trump). Trump's response may seem like an actual answer to the interpretation question, but it betrays the history of Constitutional interpretation.

The founding fathers, or at the very least Thomas Jefferson, did feel that the Constitution should change with the times; the wisdom and differences of future generations is captured in this quote of his-

"Some men look at Constitutions with sanctimonious reverence, & deem them, like the ark of the covenant, too sacred to be touched. they ascribe to the men of the preceding age a wisdom more than human, and suppose what they did to be beyond amendment. I knew that age well: I belonged to it, and labored with it. it deserved well of it’s country. it was very like the present, but without the experience of the present: and 40. years of experience in government is worth a century of book-reading: and this they would say themselves, were they to rise from the dead. I am certainly not an advocate for frequent & untried changes in laws and constitutions ... but I know also that laws and institutions must go hand in hand with the progress of the human mind ... we might as well require a man to wear still the coat which fitted him when a boy, as civilized society to remain ever under the regimen of their barbarous ancestors."  1

By crafting the logistics through which our Constitution might be amended, change and interpretation gets built into the text. However, there is still the argument that amendments are the only way change to how our Constitution is interpreted; everything else must remain the same until specifically addressed. I disagree, and modern law seems to disagree with this idea. Stemming from the concept of incorporation of the Bill of Rights, we can see what a difference- and a better difference, at that- having non-originalist interpretations make for our great nation.

As society progressed and grew to be more inclusive, such an interpretation could not last. Technology brought all of us closer together. Instead of a multi-week ride on horseback to cross into another state, cars and trains got us there in a fraction of the time. With different states having different laws, the US was more of a conglomeration of small nations than a real "United" States. Were it not for incorporation and holding states accountable to the Bill of Rights, interstate commerce and law would be far more difficult to achieve and US citizens could face harsh penalties for actions done in another state if they traveled around. Imagine an America where the New York Times or Glenn Beck were banned in a particular state, imagine trying to setup the internet or interstate highways without different states having different laws on eminent domain, imagine a state that treats far left or far right rhetoric as a criminal act. Such a nation simply would not work.

But that is the original interpretation of the Constitution. That's how SCOTUS defined it as the highest law in the land before ultimately redefining it in the wake of the Fourteenth Amendment.

I firmly believe in what Jefferson said, that the Constitution must be a living document interpreted through the wisdom of current and future generations. Change is life; without change, everything is dead, stopped, frozen in time no matter the circumstances. America is not a nation that stops; we keep pushing forward, constantly moving towards the the pinnacle of human existence, that moral statement that emerged in our nation's first great document-

"We hold these truths to be self evident, that all men are created equal, that they are endowed by their Creator with certain unalienable Rights, that among these are Life, Liberty, and the pursuit of Happiness."

This is the foundation for America, the moral and philosophical message upon which our Constitution was built and upon which it must be interpreted. As Abraham Lincoln said, the founding fathers did not mean to assert the obvious untruth, that all at the time were then actually enjoying such equality, nor yet, that they were about to confer it immediately upon them. In fact they had no power to confer such a boon. They meant simply to declare the right, so that the enforcement of it might follow as fast as circumstances should permit.2

Morality changes with time, future generations learn from the mistakes of others. As we become wiser human beings, so to does our Constitution need to grow in interpretation through various modalities (historical, structural, textual doctrinal, ethical, and more). Supreme Court Justices need to keep that interpretation in mind, keep the Declaration of Independence in mind, and apply the Constitution under the guise of both.