"Merely saying 'We need more jobs' and 'small business is important' does nothing for people when your policy revolves around catering to existing establishment."

In my writings on America's Capitalism, I gave a brief overview about the state of the job market. Understanding where jobs come from, what holds job creation back, the importance of jobs being lost, and more helps us craft policy on all levels of government, policy which gives the American people as much chance as possible.

Warning - this page has a lot of charts on it.

To begin, we must understand that startups- firms less than one year old- are responsible for the vast majority of job creation in America. Even during the recession of of 2008-2009, startups on average created more jobs than they destroyed. By contrast, businesses five to ten years and then business over eleven years old destroyed more jobs than they created. Only businesses aged 20+ years were able to have net job creation, although not consistently. If we look at the number of firm establishments opened and closed, we also see how startups and entrepreneurship plays such a huge role in job creation in the US. Consider these charts compiled from the US Census Bureau's Business Dynamics Statistics1 - 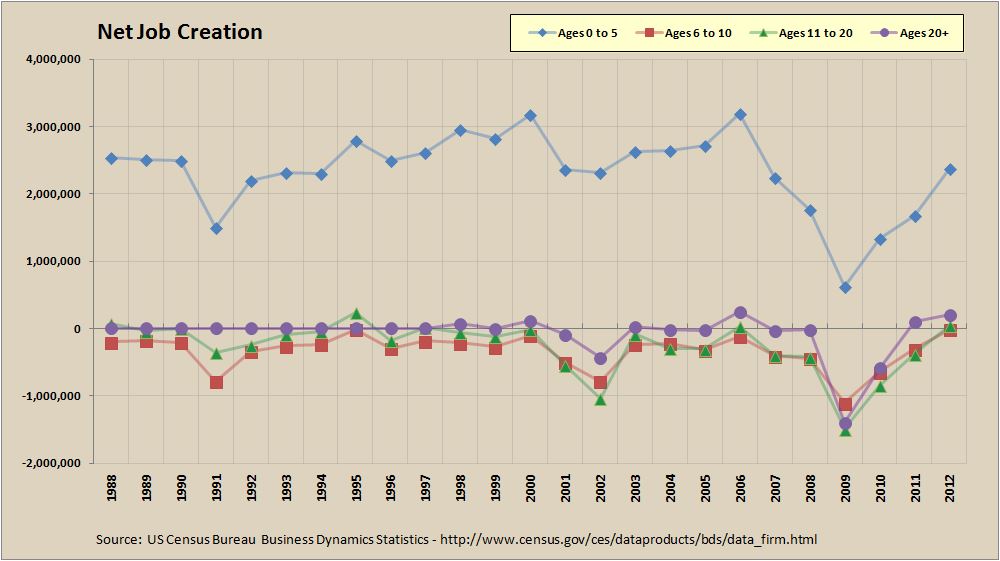 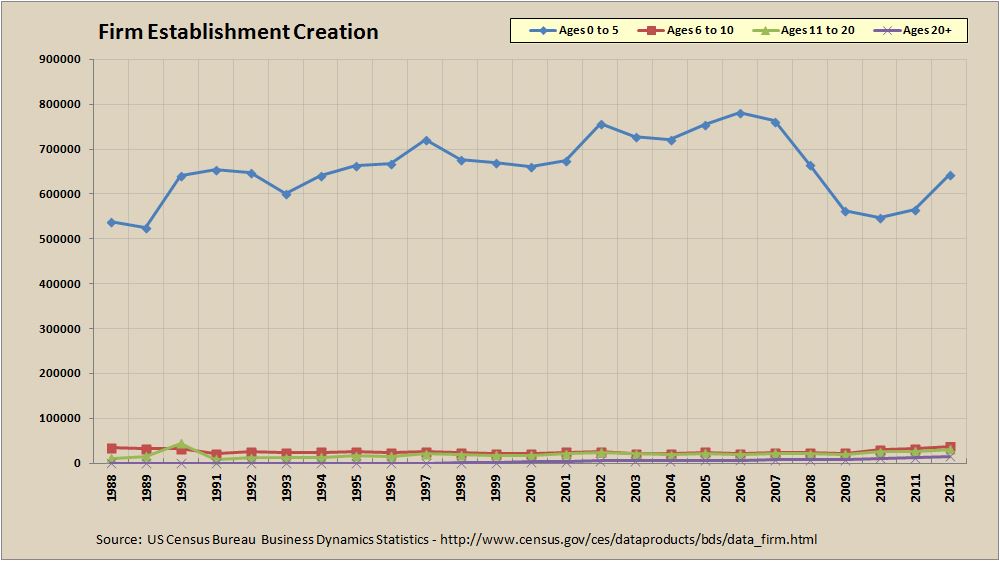 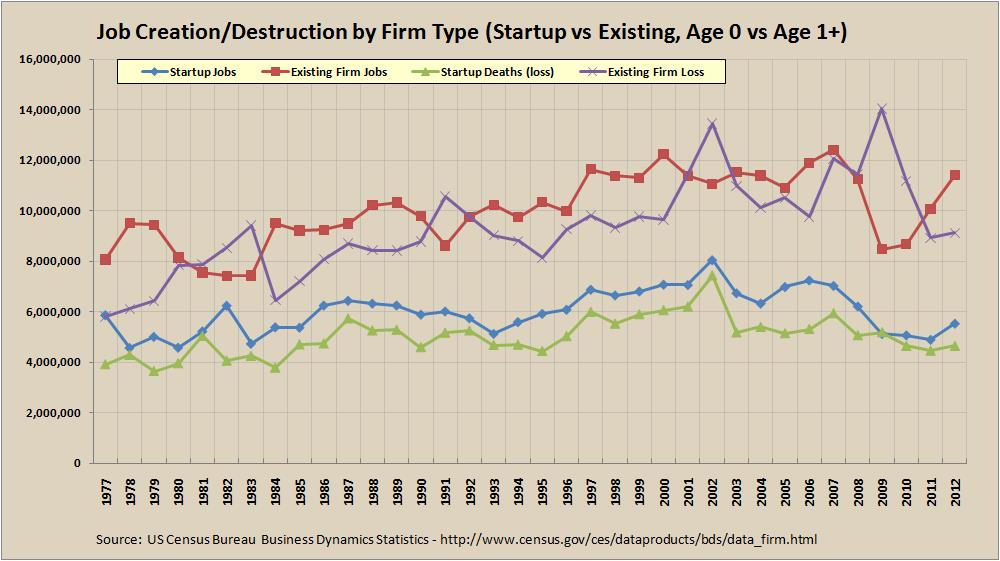 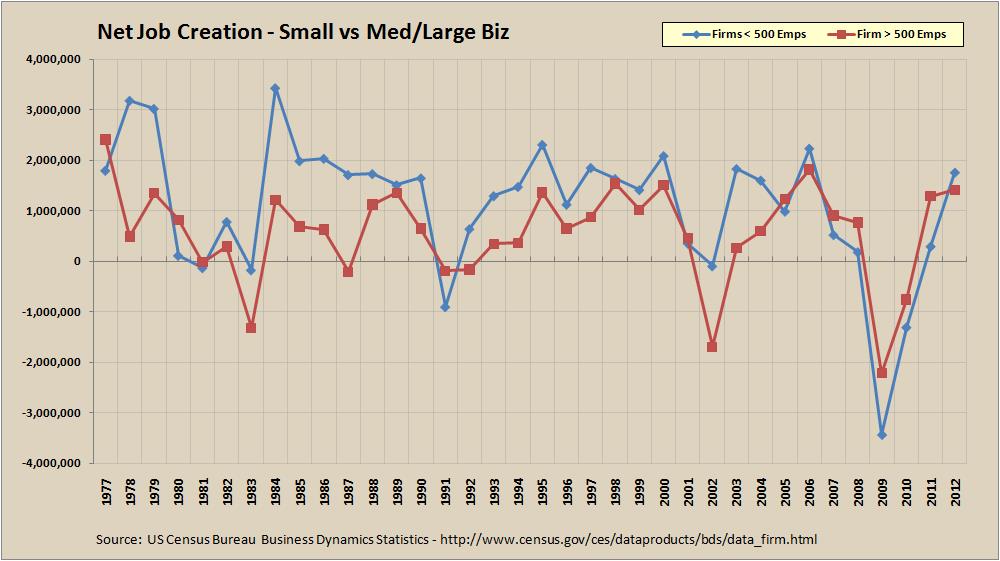 In the first two charts, it's clear as day how startups and the emergent small businesses are responsible for more job creation than all other firms combined. The fourth chart solidifies the interpretation by looking at all small business regardless of age and their net job creation by year. Between 1977 and 2012, small business accounted for 66% of the net jobs created. This is the entrepreneurial spirit of America, the American Dream that we are trying to hold on to. But it also shows that business is tough. Companies face competition all the time. The third chart shows just how many startups fail (a lot) and how even existing firms struggle with net job creation. Various reasons contribute to firms failing, with firms less than one year old closing more than any other firm age group.2 Sometimes it's a bad idea for a company, sometimes it's poor management, sometimes it's a natural disaster, and sometimes it's just not meant to be. But the real problem for startups and small business should never be government. Unfortunately, government is one of the three main reasons for startup shutdown in my opinion.

The other two reasons for startup and small business shutdowns are failure to innovate and failure to market. Recall what Peter Drucker said the purpose of a business is: to create a customer.3 The customer is what brings in revenue, thus customer acquisition is the primary goal. To do this, as Drucker says, a business must engage in marketing and innovate.4 Marketing does not mean advertising; rather, marketing refers to real market needs, understanding what customers want. If customers want smartphones, a business making rotary phones may not survive. Once the marketing aspect is done, businesses must innovate. This means they must provide different, better, and/or more economical goods or services in order to retain customers, create new ones, and remain aligned with market realities.

Seeing how important startups and small business entrepreneurship are to job creation in our economy, consider this next chart which shows the percentage of startups compared to all firms by year5- 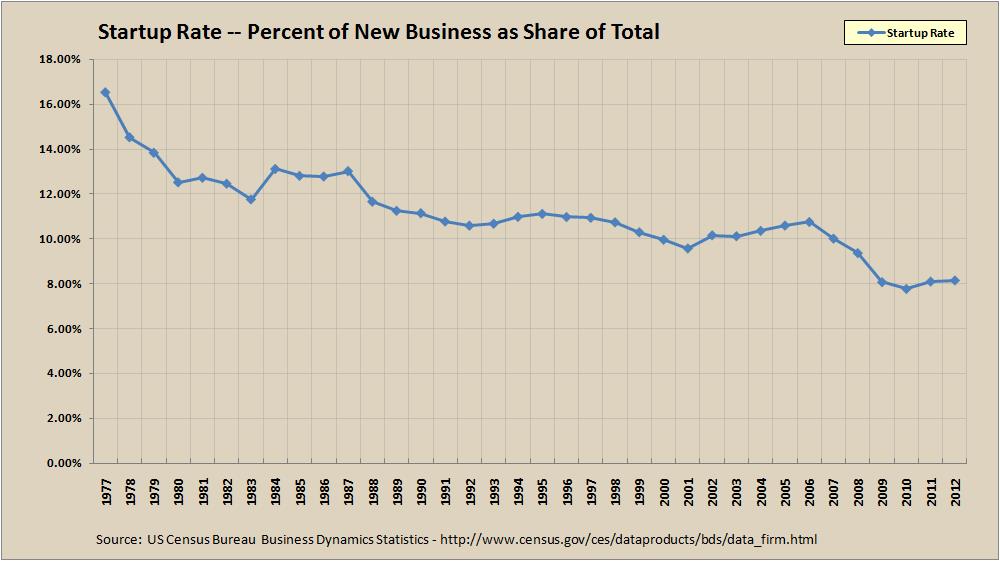 Notice how the startup rate has been in decline since data was first gathered in 1977. Even more fascinating is the general decline during the dotcom era of the late 90's. The bust is fairly visible in 2001 as a low point in the startup rate, but you would think that technological advances, huge influxes of investment capital, and more would have given birth to more entrepreneurs. It didn't. But after the bubble burst, the startup rate did increase slightly... until the economy began tanking in 2007 through 2010. As of 2012, we're still barely off the lowest levels of startup creation. I would be surprised if levels went up past 10% again in the last few years. And this is a problem considering the charts above which tell us that startups and emergent small business are the reason we have job creation at all.6

Maybe this decline in startups isn't so bad. Perhaps people are moving from startups and small business to larger, more established firms. We see from the chart above on Net Job Creation in Small vs Medium/Large Business that just prior, during, and after the 2008-2009 recession small business was not the driver of net job creation. It wasn't until 2012 where small business recovered from the economic problems they faced. Notice how the recession was the first time since this data has been captured where medium/large business outperformed small business on net job creation multiple years in a row. That goes to show you how detrimental such economic problems can be. 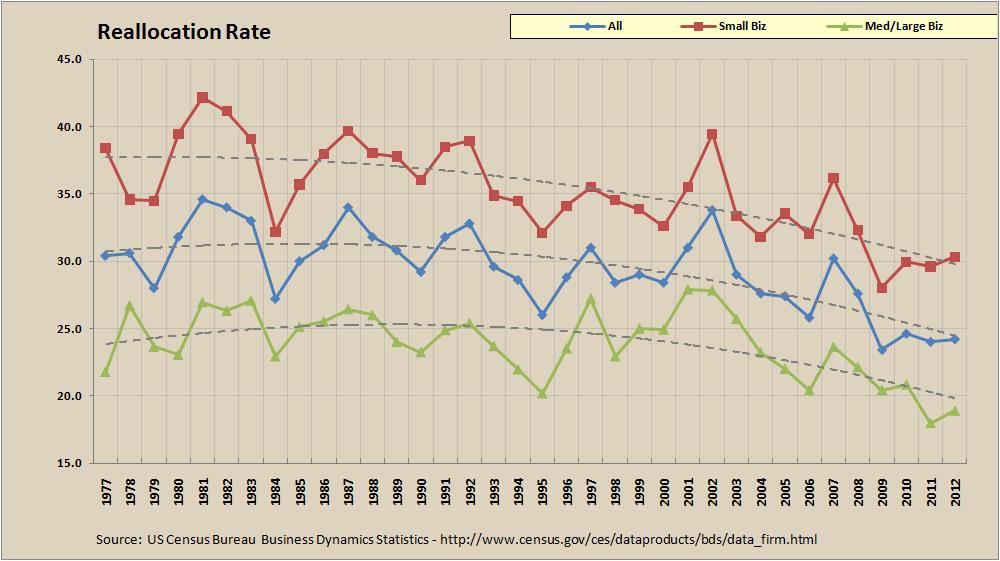 What these show us are PAYEMS and JOLTS, namely the total nonfarm employees and the total job opening/labor turnover over the given time periods. Total employment has been on the rise since the 1930's, reaching its highest point ever. Meanwhile, the number of job openings have also returned to dotcom bubble/burst levels. Employment is up, job openings are up, and the startup rate is down. There seems to be employment opportunities and market necessities to be filled, so what's the deal? The startup rate being in decline does partially explain the high number of job openings, but more so I feel the reason for such weird job data goes back to the third reason I mentioned earlier for startup/small business problems: government.

Not just federal government, but government at all levels. State and local government have a responsibility towards their residents and local businesses. According to a 2014 survey, the third annual Small Business Friendliness Survey of nearly 13,000 diverse small business owners, there are some significant barriers to market entry.8 Less startups means less job creation and, more importantly, less competition- a key tenet to free market capitalism. What do you think respondents said was the greatest barrier to entry? Many people likely feel “taxes” would be the number one barrier to entry. But the survey says otherwise, claiming that only 35% of respondents thought they paid too much in taxes.9 According to the survey, it's professional licensing causing the greatest barrier to entry. The sheer number of them required goes beyond justification of protecting public safety, thanks to the accumulation and influence of lobbying and special interest.

Consider these maps. They were made by Thumbtack.com as a result of their Small Business Friendliness Survey. What Thumbtack did in their survey is look at around 18,000 small businesses across the country, getting their thoughts and feelings on a range of issues related to small business at the state and local levels. This issues include how easy is it to start a business, how easy it is to hire new workers, government regulation affects, health and safety affects, tax affects, licensing affects, and more. So let's look at two categories of data: ease of starting a business and ease of hiring10 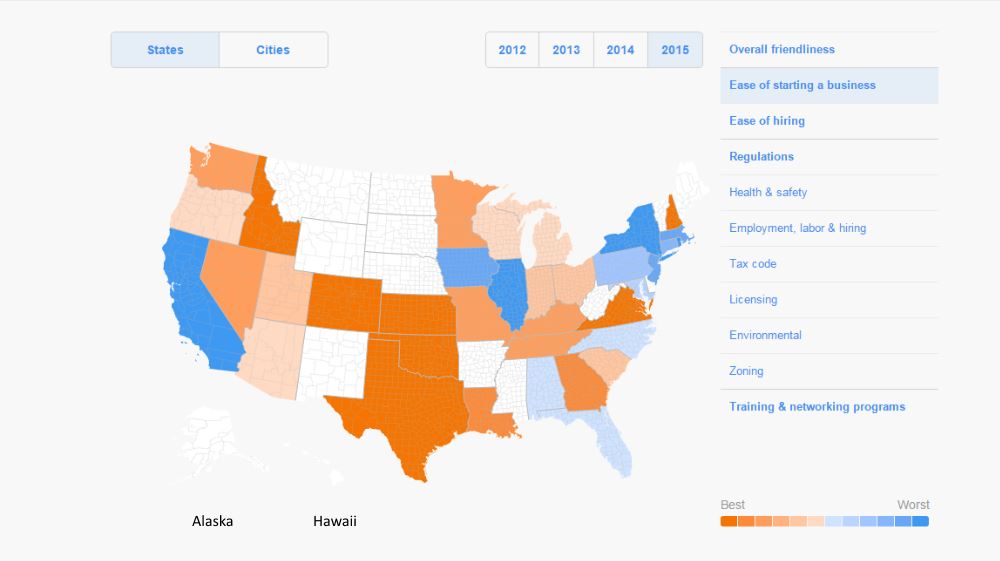 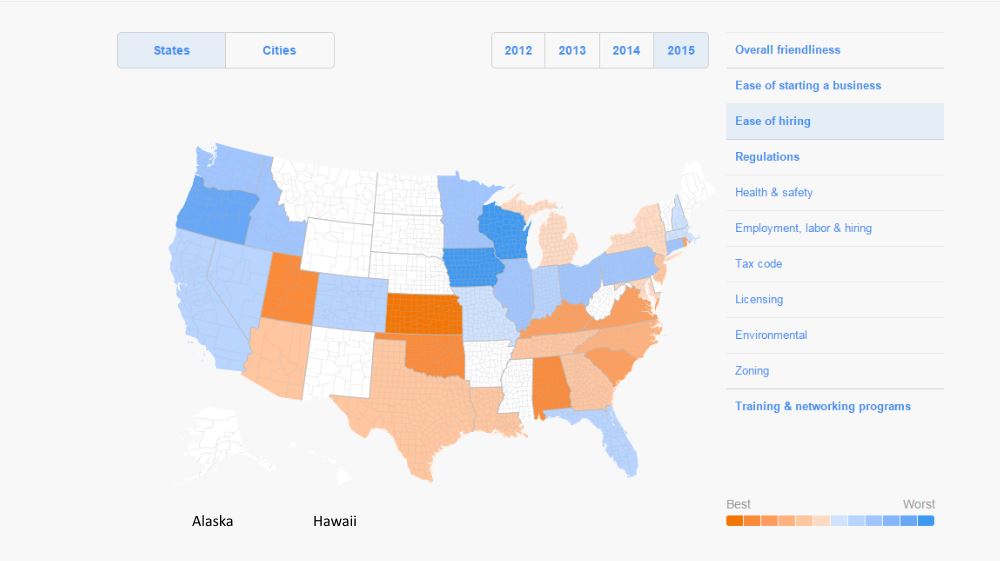 We see that in places where it's easy to start a business- Idaho, Colorado, Minnesota, and New Hampshire for example- were also really difficult places to get new hires. The reason for that? Tough to say. You can look over the survey results for the individual states by going to https://www.thumbtack.com/survey#/ and clicking on states one-by-one to see more detailed information. What I'm conveying here is that state and local government do play an important role when it comes to startups and small business. Candidates that constantly bemoan federal government for getting in the way really need to take a look at this data and these survey results to see how much state and local government roles affect the overall entrepreneurial environment. 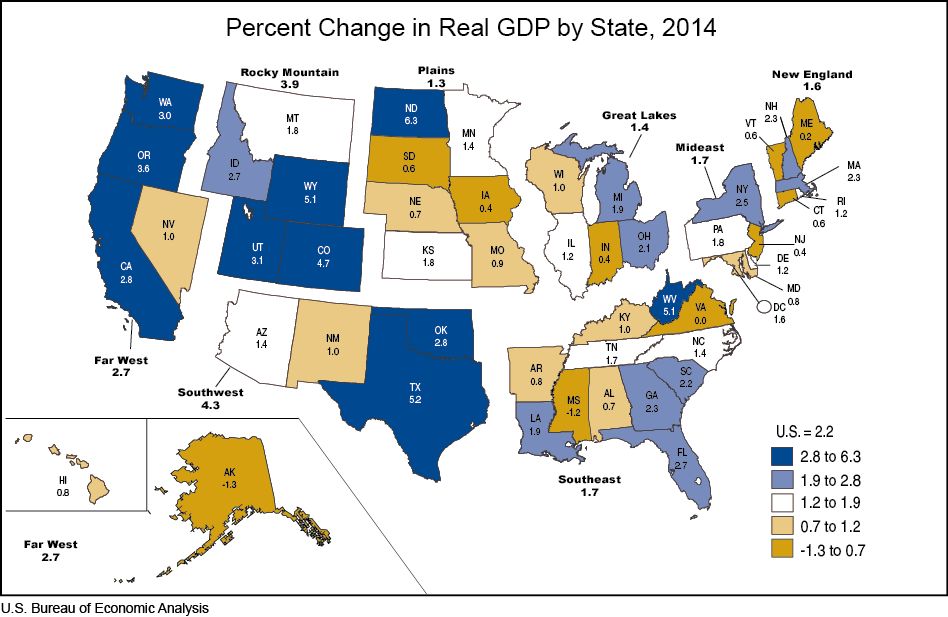 Over half of the states with better than average GDP growth also had good grades in startup/small business friendliness, maybe more. West Virginia, North Dakota, and Wyoming aren't accounted for. Now, correlation does not mean causation, but in this last chart (for real this time), we can see the percent of startups by state- 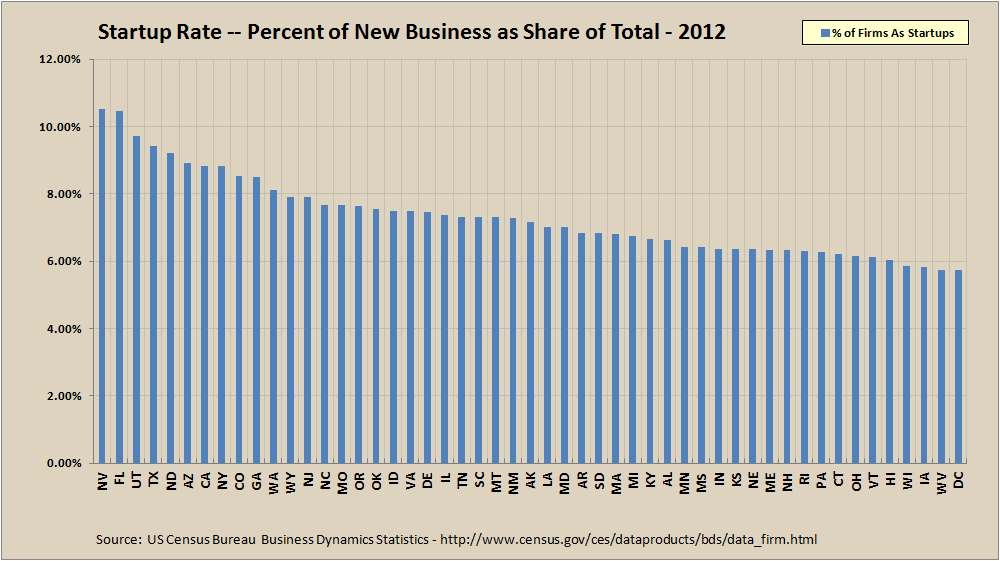 The majority of the states with a GDP increase higher than the US average also had the most startups. This relationship between startups, small business, local/state regulation, and state GDP cannot be ignored. If you truly are a candidate who wishes to see more growth, more jobs, and more overall competition in the American economy, then you must support startups and small business. And you must acknowledge the hurdles they face at the state and local levels.

But this is a federal election and I'm running for Congress. Let's talk about federal reforms that can help out.

First and foremost is intellectual property reform. Reducing the amount of government-granted monopolies means greater opportunity for innovation and competition- hallmarks of a free capitalist economy. Many, many Americans face IP hurdles, especially in the technology industry. If it is mathematically impossible to not infringe on a software patent and patent lawsuits (real suits, not "shakedown settlements") have costs upwards of $1 million, reducing that burden on technologists will allow for more tech startups and more tech small businesses to both emerge and flourish. The net effects IP reform will have- especially on technology, infrastructure, and healthcare costs- will help foster growth exactly where we need it: startups and small businesses.

The second piece of the puzzle is welcoming immigrants. Immigration is a hot topic thanks to Donald Trump, but what Trump fails to realize is that immigrants were responsible for 28.5% of all startups in 2014, more than double the number from 1996.12 In fact, immigrants were almost twice as likely as natural born Americans to start a business.13 This makes sense; the American Dream is real, it's something all humanity strives for because all humanity is endowed with unalienable Rights. Immigrants come with hope for a better life, to start fresh, to learn, grow, and succeed. Indeed, 24 of the top 50 venture-backed companies in America in 2011 had at least one foreign-born owner.14 Thus immigration reform needs to be addressed... and kicking immigrants out goes against everything stated above regarding the benefit they have on society through startups and job creation.

The third process we need is regulatory reform at the federal level. Licensing at the state and local levels are a problem, for sure, but the federal government doesn't get a free pass either. The Federal Code of Regulations is 175,000+ pages.15 Regulatory reform and procurement reform in general go hand-in-hand.